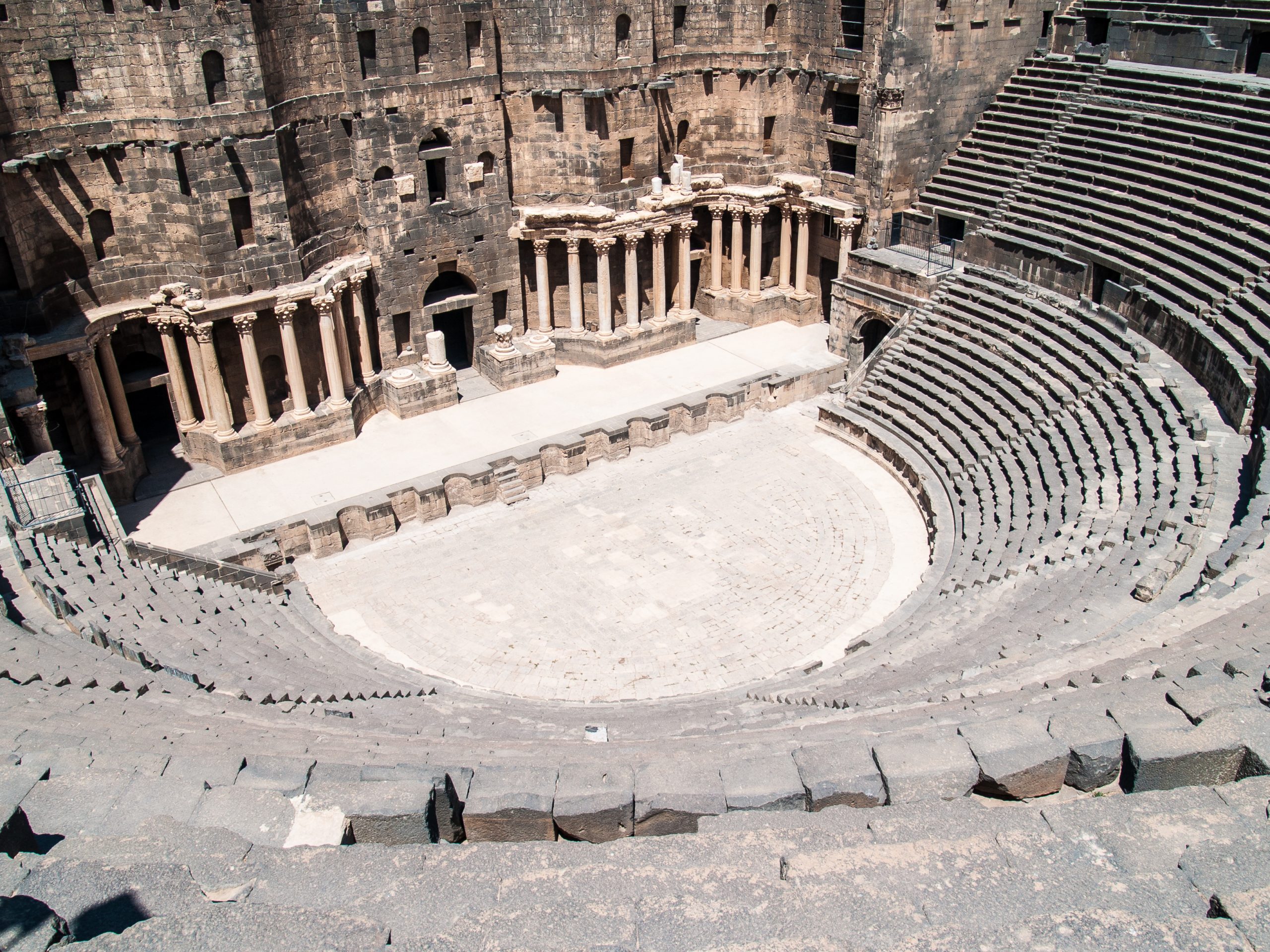 Eleven years ago, I took part in a wonderful trek between the two Syrian towns of al-Qaraya and Bosra, in the southwest of the country. Hiking for pleasure was not an activity that had been well established in Syria, but a committed group organized by Father Frans van der Lugt – a Jesuit Catholic priest from the Netherlands – was determined to change that. The hikes organized by him and his colleagues attracted hundreds of Syrians from across the country, several times per year — and I was privileged to participate on a few occasions.

Father Frans had made Syria his home for nearly five decades, where he learned to speak fluent Syrian Arabic and established a non-profit organization just outside the central Syrian city of Homs. His community center, al-Ard, cared for disabled and disadvantaged Syrians from all religious sects, creating opportunities for them to contribute to the community and feel themselves valued members of society. In all aspects of his work, Father Frans advocated mutual respect and peaceful co-existence among Syrians of all religious, ethnic, and political backgrounds.

The hikes organized by Father Frans were designed to bring together Syrians from a broad spectrum of the country’s diverse demographics. While they mostly attracted Syria’s youth, individuals of all ages participated — and occasional foreigners, like myself. Most hikes were planned around visits to the country’s numerous archaeological and historic sites, emphasizing the heritage that united – and still unites – the vast majority of Syrians in a shared national and cultural identity. The hikes created a strong sense of community, as participants engaged in shared activities for several days together: hiking, camping, dancing, playing games, preparing and eating meals, and just conversing and getting to know each other.

For me, the hikes also provided perfect opportunities to discover more about the Syrian people, who would share with me their personal stories. During this period in time – as Syria became more modern and developed, and slowly opened to the outside world – concerns expressed to me commonly involved the difficulty of breaking with conservative customs and traditions. I encountered many Syrians who struggled with falling in love with someone from a different religious sect or ethnic background — relationships typically met with disapproval from the families of both sides. The challenges of overcoming social divides were not entirely absent, even in times of peace.

While the distance between al-Qaraya and Bosra is only ten kilometers (seven miles), the hike between the two was meaningful due to the rich history of the towns, and their significance to Syria’s national narrative. In Bosra, a stunning collection of ancient Roman, Byzantine, and early Islamic monuments have made the town a UNESCO World Heritage Site. In more stable times, tourists would flock to “Bosra al-Sham” – the name often used to distinguish this town from the larger city in southern Iraq of the same name – to visit its Roman public baths and colonnaded streets, its Byzantine basilicas, and its Umayyad, Ayyubid, and Mamluk-era mosques and madrasas. The centerpiece of the site is a remarkable, 2nd century CE amphitheater that is arguably the most complete and best-preserved in the whole Middle East. The monument was later fortified, becoming an imposing citadel overlooking the town.

The neighboring town of al-Qaraya enjoys less international renown, but Syrians know it as the hometown of Sultan al-Atrash, a champion in their late-1920s “Great Revolt” against French colonial rule. A member of Syria’s minority Druze community, al-Atrash strongly believed in secularism: in his writings and speeches, he constantly emphasized national unity over religious and ethnic allegiance. He was also known for his simple lifestyle and his humility. After Syria won its independence in 1946, he refused to accept any political office. He remains an important symbol of Syrian nationalism: his modest home in al-Qaraya has been preserved as a museum, and a monumental tomb was constructed over his burial place.

Tragically, over the past several years, the area between these two towns had become a militarized front line in Syria’s ongoing conflict. The heavily fortified frontier, with Syrian government forces dug in on the al-Qaraya side and opposition militias tightly controlling the Bosra side, became impassible. The road between al-Qaraya and Bosra being cut was symbolic of the broader threat to the Syrian identity: both the secular nationalism espoused by Sultan al-Atrash, and the peaceful interreligious co-existence advocated by Father Frans, have been at risk. As the conflict unfolded, the relationship between residents of predominantly Sunni Bosra and predominantly Druze al-Qaraya deteriorated, their alliances shifting to opposing parties.

Militants who have espoused sectarian – and often genocidal – ideologies have intensified the threats to Syria’s national unity. Islamic State and various al-Qaeda-linked militias have run rampant across far too much of the country’s national territory, purposefully targeting monuments and symbols of Syria’s shared cultural heritage for destruction. In areas under their control, respect and tolerance became supplanted by hatred and violence. Father Frans fell victim to these extremists when, in 2014, he was murdered by masked militants. As opposition forces took over central Homs in 2011, Father Frans stayed behind to look after the residents that would or could not leave. Turning down opportunities to evacuate, he remained in the city as battles raged for three years. His premeditated killing took place only days prior to the militants’ negotiated exit from central Homs. It is believed that the al-Qaeda-linked al-Nusra Front was responsible.

Regrettably, the actions of foreign powers have often further inflamed religious and ethnic divides in the region — divisions frequently exploited to advance their own geopolitical aims. Many foreign states were determined to topple Syria’s central government, even if that involved miring the country’s twenty-three million people into a lengthy, extremely violent, and destructive war. As a consequence, weapons and financial support flowed to opposition militants, many with extreme sectarian ideologies. Foreign actors often had little or no real understanding of the political dynamics within Syria, or the depth of most Syrians’ attachment to the kind of secular, nationalist ideal for which Sultan al-Atrash and his comrades had always fought. The best interests of the Syrian people appear to have been neglected, as most external actors demonstrated a failure to realistically assess and acknowledge the reality on the ground, and an unwillingness to support a peaceful, negotiated resolution to the conflict. This has resulted in an unnecessarily protracted war, at an enormous cost in the loss of life, infrastructure, and cultural heritage.

It was therefore with great relief that I welcomed the news of opposition forces in Bosra coming to a reconciliation agreement with the government. Those who have had a vested interest in seeing the conflict drag on further have criticized such agreements in the past. However, as foreign states pushing for regime change in Syria have been forced to reassess that position, local militants have increasingly turned to negotiated settlements with Damascus. As has been demonstrated in many different parts of the country, reconciliation agreements have saved lives, reduced violence, and lawlessness, averted further destruction, and paved the way for the rebuilding of physical infrastructure, social service networks, and inter-communal ties.

Bosra’s ancient remains suffered moderate damage throughout the years of conflict, but they still survive remarkably intact — in stark contrast to the extensive destruction inflicted upon other heritage sites, such as the old city of Aleppo, or the ancient Roman-era city of Palmyra. Once again, the neighboring towns of Bosra and al-Qaraya can now stand as symbols of a unifying Syrian cultural identity. While Father Frans is no longer with us, many of the thousands of Syrians he inspired continue to advocate for his vision of interreligious dialogue and peaceful co-existence, both within Syria and among the Syrians diaspora. Hikes in his honor have taken place throughout Europe and in parts of the Middle East. I am hopeful their message will soon return to southwestern Syria, and that the people of the region – who have suffered tremendously through a divisive conflict – will once again celebrate the shared cultural and national heritage that binds them.